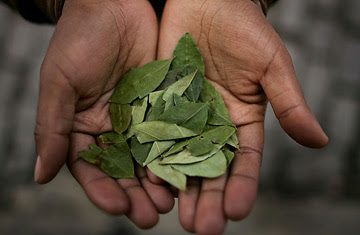 The Real Power Behind the Coca Leaf

Secret Ingredient in the Leaf

Cocaine is the most infamous and culturally enduring central nervous system stimulant. It is available in forms that are can be snorted, injected and smoked. All these forms of cocaine come from the same source –the coca leaves from the coca shrubs found in Central and South America.

In earlier ages, the coca leaves were chewed by the Incas. The indigenous leaves provided energy and vitamins for the hard working people while the rest of the world lived in blissful ignorance of the true power of these leaves.

The Spanish became somewhat interested in the leaves during their conquest of the Incas people and eventually decided it was best to let the Incas chew their coca, because it kept them working. However, the early history of the coca leaves is relatively quiet and uneventful. No one could know at the time, what impact the leaves from a plant would eventually have in later times with more “civilized” peoples.

In the late 1800s coca leaf use became a bit more eventful when cocaine was created through an extraction and chemical process.

Two European researchers of the day, Sigmund Freud, the father of psychiatry and surgical pioneer, William Halsted became addicted.Working on opposite sides of the channel, both gave the same reason for their use of the drug- they wanted to research its therapeutic value for patients.Freud thought it was the cure for opiate addiction and depression and Halstad thought it was the new wonder drug to replace the current anesthetics in use. Both had accurately assessed problematic clinical situations, but the cocaine “cure” they forwarded through self-experimentation created new clinical problems.Cocaine turned out to be the proverbial cure that could kill the patient. Both became addicted to the point where their careers were temporarily affected.

Up until the early part of the 1900s, too many people thought cocaine might fix their problems and the attendant addiction cases caught the attention of the United States Congress. Cocaine became a controlled substance through the Harrison Narcotics act of 1914.

This cocaine era came and went with a little turmoil, but nothing like the world would see in the 70s and 80s.

These same leaves that the Incas had chewed in an effort to get more work done had been turned into a product that had Miami in turmoil in the 70s. July 11, 1979 was described as one of the most violent days in United States history, described as making 1930s Al Capone Chicago look like a “Church Sunday Picnic.”

It was the event that the war on drugs as declared by Nixon became a real war. This was the day that President Regan called out the troops.

The day was infamously known as the Dadeland Massacre. On that day, the “Godmother of cocaine” Griselda Blanco ordered hits on rival dealers. The massacre occurred, first in the Crown Liquor Store where the targeted rivals were killed and continued in the parking lot as the shooters continued to fire, killing public.

This set off the chain of events known as the “cocaine wars”.

The leaf of a plant from South America had transformed Miami from a retirement – vacation paradise to the drug capital of the world and the most dangerous city in which to live.

The Politics of Cocaine

The next two decades found unrest and confusing political circumstances surrounding cocaine in countries like Mexico, Honduras, Panama, Columbia, Nicaragua and Peru. These countries fed the large American appetite for cocaine and there was plenty of money involved. The American government never seemed to be able to stop the cocaine from coming and was often accused of being in cahoots with the drug trade of these countries through CIA connections and shenanigans. The United States supplied arms and money to South American contras and through some back doors these actions seemed to be fueling the cocaine trade. The explanations were confusing and Americans probably didn’t really understand what was going on. South American governments and United States politicians were blamed but the end users kept partying and spending the big bucks . They are the ones that kept the cocaine “wars” fueled and the American emergency rooms hopping with overdoses.

The Nature of the Beast

'Cocaine Hydro-Chloride' is highly addictive. If governments and dealers can’t manage to control the flow of cocaine and it is available, then the market will do nothing but rise as the users themselves usually cannot control their cravings.

Individuals develop a tolerance to the pleasurable effects of cocaine quickly. In other words, it takes more and more of the drug to create the pleasurable effects that occurred with the first usage. Overdose is common because it takes more to get to that high and the crash of withdrawal can be unpleasant. Withdrawal includes restlessness, depression, malaise, bad dreams, fatigue and a general slowing down. These are not always overtly demonstrated and often it appears that a cocaine abuser is simply just sleeping a lot. Because it is not accompanied by the severe body reactions that accompany opiate withdrawal the power of the addictive quality of cocaine can be under estimated. However, many addicts will and have done almost anything to get that next fix. This addictive quality, more than the guns of the gangs in Miami, is the real power behind the money that had some politicians licking their lips and others looking away.

And the real weakness behind the inability to control the flow of this drug is an ethics matter. The coca leaf has innocently been growing for centuries, unchanged in character. It is man and his culture that has allowed this leaf’s power to travel the planet, start gang wars, fill emergency rooms and sent some of the best to their graves.

It is true that statistics tend to indicate that cocaine abuse is on the decline. However, until the real cultural problem is addressed and there is money to be made it is unlikely that the problem of the coca leaf will ever go away.

This post was written by Matt Hawk. Matt is dedicated to helping people understand the dangers of drugs, and helping those who have faced those dangers get into recovery. Matt writes for the Narconon Rehab network. Originally posted at WiseHealth-Edu

Best Coca Tea is made by an American living in Venezuela

Most potent coca tea in the world is made by a US Expat in Venezuela Triple 3x Coca Tea is being sold on street corners all over Caracas... 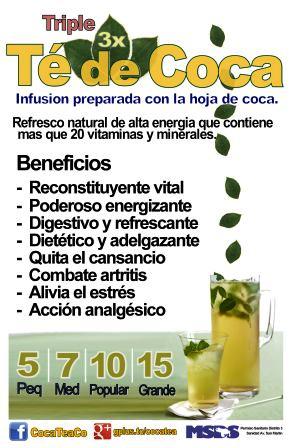